Sophia Scott came to Direction with a question about team development: How can we get a better profile as a team within our organization and how can we break certain patterns within our team?

When Sophia Scott became a manager of a support team in a major Dutch multinational company one and a half years ago she found a group of people who had mostly worked together for many years. “There is a lot of useful knowledge in my team but that knowledge was not valued much by the rest of the Organization and within the team itself it was not always appreciated.“

Apart from that quite a lot of set patterns had developed in the team between people who had been working together for quite a long time. “People accepted things from each other about which you could ask if that was such a good thing.” says Sophia.

In February 2013, Direction created a team development program for support staff: with talks and activities in a fort at Bunnik and a concluding ‘dinner-in-the-dark’ at the blind Institute Bartiméus. “That day we included a RealDrives © color analysis which reveals how driven you are and what you care about in your work. It showed that people’s behaviors don’t always reflect what they find enjoyable and that the color yellow was hardly present in our team: reflecting someone who keeps an eye on things and looks outside with a vision,” says Scott.
“For me the color green emerged as strongest preference; equality, cooperation and involvement are important to me. My behavior does not always reflect this. You also saw that some people have a ‘blue’ preference: they love security and structure and like to work according to systems. But because that is not always possible in their work environment they adjust and they actually work in a way that they do not enjoy. You would need to find a ‘middle ground’ compromise for this.”

During the practical assignment the relationships and roles that everyone plays in the team became quite clear. The Group had to take a bar through various poles and get it to an end station. Team members also had to lower themselves from the fort using a rope and with help from their colleagues.

After the program and tasks Scott and her colleagues were given personal feedback. “For me it was very clear that I could take on my role as Manager much better and that I had to take the lead more,” says Scott. “Others also recognized themselves in the feedback they received.”
After this day it was clear what everyone’s position was in the team. “I found it extraordinary how Direction was able to highlight team dynamics by using a theoretical approach and relatively simple practical tools.”

The second session was also centered around team development: this time the support team was to translate the findings of the first team building day into concrete behavior. In preparation the team members had to ask colleagues outside of their Department about their impressions of the support team.
Scott: “This also showed that we should regard ourselves in a more positive light and that we can be proud of what we do.”

Decide what we stand for as a team 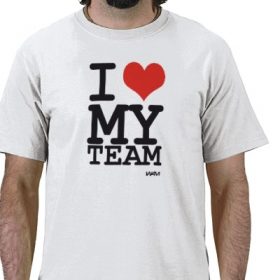 “Much has changed since the two sessions on team development”, notes Scott. The team selected certain key words to reflect what they believe they stand for: customer focus, knowledge through continuity, service-oriented, commitment, willingness, keys in processes and motivated people.

“Things work much better now that we have chosen our direction together”, says Scott. “ We dare to discuss issues with each other. And if difficult issues are on the team meeting agenda, we can also deal with those.”
The team also tries to venture out more. “From now on at each quarterly meeting in the Organization I will be communicating what we have done and what is going on with us. This will make our support for the entire company more visible.”

Following the sessions Sophia has also reflected on her own role within the team. She is going to try to represent more of the color ‘yellow’. “Currently I am more occupied with setting the team guidelines for me to monitor things. I am not going to try and solve everything myself and will involve other ‘yellows’ based on their strengths.”

In the process around team development, Sophia will be keeping her finger on the pulse. “I am now constantly aware of where we are heading and what needs to be done. We will re-evaluate things soon. You can’t achieve changes from one day to the next.”

Sophia manages 9 support staff at a large Dutch Multinational Company, active in about 150 countries and with an annual turnover of around 15 billion Euro.

Wageningen UR with Direction; Leadership Expedition