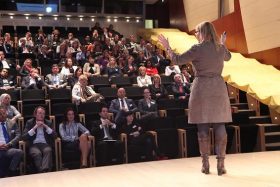 Founder and Managing Director of Direction and the HPO (High Performance Organizations) Center. After her studies at Nyenrode and Thunderbird in Phoenix Arizona, Esther Mollema (1965) worked as Director of different training companies in the Netherlands, Japan, Germany and the United States. Esther has been conducting training, lectures and master classes on the subjects of High Performance, Leadership & Diversity for over 15 years. She is frequently interviewed and invited to share her knowledge on Leadership, Diversity & Inclusion and Implicit Bias and how to overcome this. In 2009 she published her book ‘50% more talent: success through women’ and in 2015 her second book was published on Diversity and Implicit Bias: Success in Managing Diversity. Esther Mollema was selected on The NextWomen100 list, 100 most successful female entrepreneurs in the Netherlands. Since 2013, Esther Mollema from Direction became the Dutch partner of the Professional Boards Forum and partner of the feedforward analysis™. Esther assists and advices many organizations on their diversity and inclusion programs such as EY, Leaseplan, Shell, KLM, Dutch Central Bank, Chubb, Philips, Lidl, Nespresso, Schiphol Airport, KNAW, UMC Utrecht, University of Utrecht, Free University Amsterdam, Wintershall and Radboud University.

“An outstanding event with an extremely high quality of Chairmen, CEO’s and executive females present. The Boardsforum is an investment in time that I would recommend to all senior female executives looking for future board appointments as well as Chairmen looking for visibility of top female talent.”
Helen Mets-Morris, VP and Managing Director Avery Dennison

“After having taken part Chairperson twice, I can say that this is a perfect platform for women to take a peek into the world of a Commissioner”.
Marike van Lier Lels, commissioner – Reed Elsevier

“Looking back I realize again what a great gift Esther Mollema has given to all women. I Hope that I can attend more workshops and learn more from her!”
Ilse Roeleveld, Compliance Officer ING 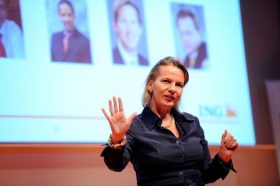