The aim of this part is to give an informative report and engage in a workshop. It is meant for the Diversity Team and it contains the results of the scan, the findings, conclusions and recommendations thereof for more influx and better flow of women within your organization. The results give your organization content and support for managing Diversity and Inclusion. These, when chosen for Cultural Diversity Research, can be used as a foundation for the Diversity & Inclusion training.

In order to make useful conclusions and recommendations, the research consists of three parts:

To get an understanding of the precise opinions and opportunities for better gender diversity within your organization, we will spread a questionnaire among all employees (or a sample of an equal number of men and women). This is done online and will take about 15 minutes of the respondent’s time. We mainly ask for opinions about your corporate culture, the prevailing norms and values, but questions cover also the employees’ ambitions, opportunities and careers.

The scan consists of three parts, each preceded by a short instruction:

After processing the data, to color the story behind the numbers, 12 selected respondents from this group will be interviewed. The selection will include an equal number of men and women at your organization on various levels in the organization. These interviews take 45 minutes. It is important that six interviews are scheduled on one day.

Based on the analysis of the scan and the in-depth interviews, a report will be prepared. The report will not only show the scores on the online scan, but also provide conclusions and recommendations. The report will be discussed with the Diversity Team at your organization in a workshop that will take part of a day.

The focus of the first workshop will be awareness and diversity and inclusion.

An important thread in both workshops are Mindbugs.

It is widely known that people ‘do not always say what they think’. And it is widely suspected that people ‘do not always know what they think’. Research shows that the more a person is prejudiced in relation to a particular issue, the more likely it is that the way they act will be influenced by their prejudice when they are dealing with people who belong to a group with which they have a positive or negative association.

Before the first workshop we ask the participants to fill in Direction’s Mindbugs test.
This Mindbugtest is partly based on the Harvard IAT test (developed by Harvard scientists Mahzarin Banaji, Brian Nosek and Tony Greenwald). The test is designed to measure implicit associations between images and words. Our Mindbugtest can be used as a tool to gain more insight into your own unconscious preferences and those of your organization on issues such as gender and leadership. We use this test to let you experience how the brain works. Needless to say that diversity is more than gender, as we will explain during the workshop.

If the Culture Diversity Research has been used, the outcome can be processed in the workshops.

The focus of the first training will be awareness. We will guide you on what to keep in mind to overcome bias and lack of diversity.
During this workshop, we cover the following topics:

In the second workshop we will focus on actions of diversity & inclusion :

During this session we explain briefly the usefulness of gender diversity and unconscious bias to other invitees. If desired, when the Cultural Diversity Research has been conducted, the results of the research can be included in this session.

Esther Mollema has been the founder and director of Direction since 1999 and the HPO Center since 2007. She is a sought after speaker. Her 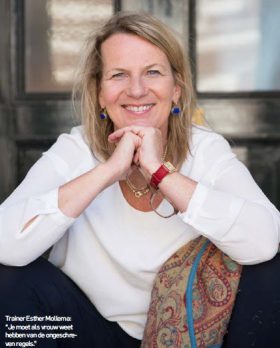 enthusiasm for more diversity and female leadership has put her on the map in the Netherlands and elsewhere in the world. Esther has acquainted many women and a larger part of the Dutch business community with the concept of Female Leadership through her training and presentation sessions. She has conducted trainings, lectures and master classes on the subjects of Female Leadership and Diversity for years. She also assists and advice many organizations on their diversity programs.

In 2013, Esther Mollema became the Dutch partner of the Professional Boards Forum and a partner of the feedforward analysis ™. In September 2015, Esther wrote her second book about Diversity and Mindbugs.

Together with our clients we create tailor-made training that improves on the learning objectives of your team and / or organization. Customization at Direction is truly customized. No forced locations, trainers, equipment, etc. Direction designs and organizes tailor-made programs that are 100% in line with the needs and objectives of our customers. We help you and your team or organization to gain insight and translate that into results. We like to think along with you, design interventions and help you achieve the desired result.